Review of the submissions of Return of Election Expenses by candidates in the Clarendon South-Eastern by-election for March 2, 2020 has seen:

In fulfillment of requirements listed at section 60(7) of the Act, the attached has been drafted for publication. The amounts declared are for the period February 5, 2020 through to March 2, 2020. 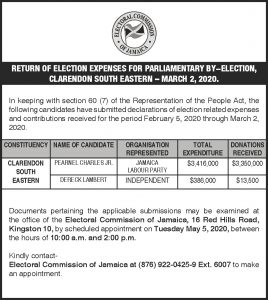 Waiting on your new ID card? Request a Letter of Identity to continue conducting business until you get your physical voter ID card. https://www.instagram.com/p/CktDy4eOfZM/?igshid=YTgzYjQ4ZTY=

Please note that the Electoral Commission of Jamaica is NOT associated with this recruitment. All recruiting and any other matters concerning the ECJ will always be published through our official channels. https://www.instagram.com/p/CklUH4Pupmp/?igshid=YTgzYjQ4ZTY=

The transfer process is simple; Visit the Electoral Office of Jamaica constituency office where you currently live and apply for a transfer of registration. https://www.instagram.com/p/CkOEmA6uUIU/?igshid=YTgzYjQ4ZTY=