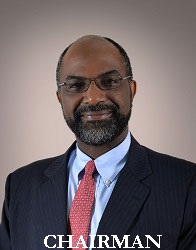 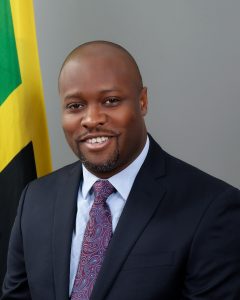 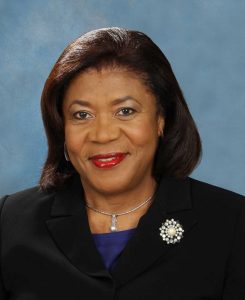 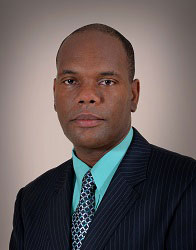 A Chartered Accountant and graduate of The University of the West Indies, Mr. Earl Jarrett is the General Manager of Jamaica National Building Society. He is also the Honorary Secretary of the Private Sector Organisation of Jamaica, and a member of the Executive Board of the Caribbean Association of Housing Finance Institutions (CASHFI). He is a Director of the Gleaner Company’s UK and North American Boards.

He has received numerous awards for his contribution to nation building, including the Pelican Award from The University of the West Indies, the Caribbean Luminary Award from the American Foundation of The University of the West Indies and the Hummingbird Award for International Achievement from the American Friends of Jamaica.

Mr. Maurice Barnes holds a (MSc.) in Digital Technology with Distinction from Heriot-Watt University in Edinburgh, Scotland, a Bachelor of Sciences (BSc.) in Computer Science and Electronics from the University of the West Indies, Mona and a Postgraduate Diploma in Innovation and Design Thinking from Emeritus (MIT, Columbia Business School, Tuck School of Business). He is a Scrum Master Certified in Agile Project Management and received Executive Leadership training at Sloan Business School at MIT.

Mr. Barnes started his professional career at Price Waterhouse Coopers (PWC) analyzing and designing information systems for clients.   He then moved on to the Jamaica Social Investment Fund where he successfully implemented an Enterprise Management Information System and then to the Fiscal Services Ltd., to manage the design and development of a Loan Management System.

He was appointed CEO of eGov Jamaica Ltd. in 2017 and has successfully re-organized the company to deliver first-class IT solutions to various Ministries, Departments and Agencies of Government. During his tenure at eGov Jamaica, he has managed the design, development and launch of the “WeCare” Portal for the cash transfer of payments to Jamaican Citizens and Businesses under the Ministry of Finance and Public Service CARE Programme which was developed in record time.

Mr. Barnes is currently the Chief Executive Officer of VM Innovations Ltd. a subsidiary of the VM Group where he leads the ideation, design and development of innovative new business models, products and services for the Group.

He is a past Board member of JMMB Money Transfer Ltd. and the JMMB Group’s Information Systems Committee of the Board and currently serves as the Deputy Chairman of the Universal Service Fund. He is also a member of the National Information and Communications Technical Advisory Council (NICTAC).

Mr. Barnes has represented Jamaica on The Electronic Government Network of Latin America and the Caribbean (REDGEALC), served on the Archives Advisory Committee and the ICT Governance Committee of the Jamaica Customs Agency. He has delivered speeches at various technology conferences and sat on various local and international discussion panels in the areas of Digital Government, Cybersecurity and Emerging Technologies.

Mr. Barnes was appointed as a Selected Commissioner of the Electoral Commission of Jamaica (ECJ) effective November 1, 2021.

Justice Karl Harrison is a retired judge of the Court of Appeal, who has been awarded a National Honour, Commander of the Order of Distinction. Throughout his legal career, he has served in several positions, including Judge of the Court of Appeal and Supreme Court, Senior Resident Magistrate, Assistant Attorney General and Crown Counsel in the Attorney General’s Department. He has also served as Acting Judge of the Grand Court of the Cayman Islands, on several occasions.

Justice Harrison is a Commissioner of the Financial Services and Corruption Prevention Commissions and chairs the Criminal Records Board. He is also a member of the Firearms Review Board. He is an associate tutor at the Norman Manley Law School and has published several legal practitioners’ books.

Justice Harrison was appointed to the ECJ in March 2014.

Senator the Honourable Thomas Tavares-Finson is an Attorney at Law by profession who practices primarily as a criminal trial advocate. He is the President of the Senate, having been elected in March 2016. A member of the Jamaica Labour Party since 1978 he sits on the parties Central Executive and Standing Committee and chairs the parties Electoral Committee.

Educated at Jamaica College, he completed his undergraduate studies at McMaster University in Ontario, Canada. He received an M.A. from the Institute of Commonwealth Studies, University of London. He was called to the Bar of the Honorable Society of the Middle Temple, London and called to the Jamaican Bar on 1982.

The Hon. Chief Justice (retired) Zaila McCalla, prior to her retirement in 2018, served in the Justice system as Clerk of Courts, Crown Counsel, Assistant Director of Public Prosecutions and Resident Magistrate (now renamed Parish Court Judge). She has also served as Master-in Chambers at the Supreme Court and in 1997 she was appointed as a Puisne Judge. She later held the position of Judge of Appeal until 2007 when she was appointed as Chief Justice of Jamaica and conferred with the Order of Jamaica.

During her tenure as Chief Justice, Justice McCalla was chairman of the Judicial Service Commission, and chaired / co-chaired a number of Committees including the Supreme Court Rules Committee, the Queen’s Counsel Committee, the Advisory Board of the Justice Training Institute, the consultative committee of Bench and Bar, among others. She is a Fellow of the Commonwealth Judicial Education Institute in Halifax, Nova Scotia, Canada.

In 2010 the Hon. Chief Justice (retired) served as Chair of the Conference of Caribbean Chief Justices and Heads of Judiciary.

Justice McCalla, in collaboration with local and international development partners and various stakeholders in the justice system, has spearheaded a number of initiatives to reform the Jamaican Justice system. She has led judicial education and training for judges, the implementation of criminal case management in the Courts of Jamaica, and the establishment of the Judicial Education Institute in 2017. She was involved in the preparation and publication of several manuals and guidelines for guidance of judges and court staff and has participated in and presented at numerous judicial conferences and workshops, locally and internationally. During her tenure as Chief Justice, the Drug Treatment Courts in Jamaica were extended and she has participated in the training of Drug Treatment Court professionals in Jamaica and overseas.

Justice McCalla currently serves as a member of the Privy Council and sits on the Judicial Service Commission of the Turks and Caicos Islands. She is an Honourary member of the Honourable Society of the Middle Temple in London. She is also Chancellor for the Anglican Diocese of Jamaica and the Cayman Islands and is the Provincial Chancellor for the Province of the West Indies.

In 2016 she was conferred with the honourary degree of Doctor of Laws by the University of Technology.

Justice McCalla was appointed Commissioner of the Electoral Commission of Jamaica in January 2020.

Mr. Wensworth Skeffery has been a Nominated Commissioner since January 1, 2018.

He was appointed a Government Senator in January 2012 and reappointed as an Opposition Senator in March 2016. He is currently a Deputy General Secretary of the Peoples’ National Party (PNP) and former Region Five Chairman for the party.

In the field of education, he has served as the Special Assistant to the then Minister of State in the Ministry of Finance and Planning from 2000 to 2002 and was the Coordinator for the Science Technology Engineering and Mathematics (STEM) Programme in the Ministry of Education from 2014 to 2016. He is also Past Chairman of the Woodlands Primary and BB Coke High Schools. A teacher by profession, his classroom experience has taken him through several high schools in the parishes of Manchester and St. Elizabeth, having taught Physics, Mathematics and Chemistry.

Mr. Skeffery holds a Diploma in Education from The Mico Teachers College, a Bachelor of Science Degree with honours in Public Administration from the University of the West Indies and a Masters of Arts in Teaching with distinction from The Mico University College. He is also a past student of the Edwin Allen High School.

He is married with a daughter.

Dr. Franklin has a Diploma in Education (Dip.Ed.), Bachelor of Science in Management Studies (B.Sc., Hons.) from the University of the West Indies (UWI), a Master of Arts in Teaching (M.A.T.) from the Mico University College, and a Doctorate in Education (Ed.D.), with concentration on Organizational Leadership, from the Nova Southeastern University.

Mr. Brown, a veteran public servant, has spent close to twenty-nine (29) years working  in Administration within the public sector. Prior to joining the ECJ, he spent eighteen (18) years with the Petroleum Corporation of Jamaica Group, the last five of which he served as General Manager of the Petroleum Company of Jamaica.

His regional and international experience includes representing the ECJ at overseas conferences and Election Observation Missions to Costa Rica and Suriname.

Mr. Brown hails from the parish of Clarendon and is a proud past student of the Glenmuir High School. He is a committed Rotarian who continues to play an active role in community service.

Dr. Dayton Ricardo Campbell is 37 years old and hails from the community of Bamboo in the parish of St. Ann. He received his early education at Bamboo All Age School and later attended Ferncourt High school and Brown’s Town Community College. He then furthered his studies at the University of the West Indies in the Faculty of Medical Sciences where he graduated with a Bachelors of Basic Medical Sciences (BBMedSci) and the Bachelors of Medicine, Bachelors of Surgery (M.B.B.S). He was pursuing a Doctor of Medicine in Ophthalmology (DM) at the time of his election to the House of Representatives. He has also pursued a Bachelors of Laws (LLB) with the University of London, which he completed in 2015.

Dr. Campbell is described as a robust young man. He is the past president of Jamaica Medical Doctor’s Association and former Member of Parliament for St. Ann North Western; he was the youngest Member of the House of Representatives having been elected at 28 years of age. He has a passion and the zeal for nation building in the areas of education, healthcare, community development and job creation. Dr. Campbell implemented an extensive education program called the 2nd Chance Initiative which saw him offering GSAT classes on the weekends, CSEC classes in Mathematics, English Language and Principles of Business, Adult literacy and numeracy classes and skills training in Cosmetology, Bartending, Waitering, Customer Service, Merchandising, Tour Guide, Web Design, Food Preparation, Food and Beverages, Plumbing, Automotive Mechanic, Wood Work and Cashiering. Of note, all classes were free of charge; thus far he has trained over 3,600 students.

Dr. Campbell is a seasoned medical professional with experience in Accident and Emergency Patient Treatment. He has used his medical qualifications and experience to assist persons across Jamaica. He offered a free mobile clinic on a weekly basis where he attended to his constituents and signed them up to National Health Fund (NHF) and Jamaica Drug for the Elderly Programme (JADEP).  Additionally, he has done over 14,000 medicals free of charge for students going back to school.